At 18 months old Tessa Brook was diagnosed with lingual sarcoma, a cancerous mass on her tongue. 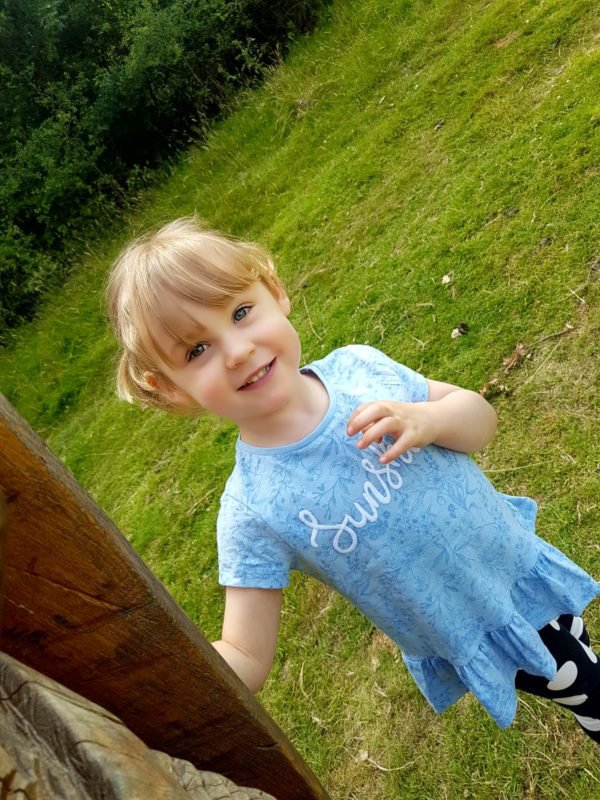 At 18 months old Tessa Brook was diagnosed with lingual sarcoma, a cancerous mass on her tongue.

After diagnosis by biopsy, Tessa’s parents Hayley and Martin, brought her to the Trust for an emergency MRI scan to determine what surgery she would require. Before the scan Tessa was intubated to protect her airway and lungs, but the mass on her tongue was very fragile and ruptured causing a two-hour bleed. Tessa was sedated and moved to paediatric intensive care (PICU), before she was operated on the following day to remove half of her tongue.

Hayley said, ‘at this point the situation was an unknown for everyone involved. The surgery, a partial glossectomy, was a very rare procedure to carry out on a child but there was no alternative, chemotherapy and radiotherapy were not options. We had no idea whether it would work, or the changes it would mean for Tessa if it did.’

It was unclear whether Tessa would be able to swallow, eat or talk and Tessa was given a tracheostomy during the operation to protect her airway. She was sedated for 7 days in PICU and when she finally came round was also suffering from morphine withdrawal.

‘Immediately after the first operation she was not at all herself. It was difficult to see her like this but we were so well supported.

‘Although the focus was on the practical stuff, things like getting Tessa’s calorie intake right with the tracheostomy in place, we also had no idea what her ability would be like to eat, drink or even speak. The speech and language team came and sat with Hayley and I, taking time to talk about what would or could come next in terms of her recovery.’

‘They explained to us about working on her swallow, suggested different foods to try and which foods would work well together. Most importantly, they took the time to talk to Tessa and managed to make her smile for the first time since she had woken up. That alone gave us a huge boost as throughout all of this her wellbeing was the most important thing.’

‘From that point on someone from the speech language team would pop by most days when we were in. This really helped as it meant we could ask any questions and also watch as they worked with Tessa, picking up ways to support her recovery at home. It was also great to see familiar faces.’

Although the initial operation was successful, Tessa’s surgical team were not happy that the ‘margins’ of tumour clearance were large enough (only 0.1 millimetre) and she underwent a further operation to remove the scar tissue from the previous surgery which showed no evidence of tumour. She was then operated on a final time to close her tracheostomy hole.

After three weeks in hospital Tessa went home just before Christmas and eight months after her original diagnosis she was given the all clear. The paediatric oncology team remain pleased with her progress. The cancer itself can be slow growing so the family now attends the Paediatric Day Unit (PDU) every four months for an MRI scan and chest x-ray. This will continue until Tessa is 10 years old.

The nature of the condition and the treatment Tessa required meant that she was listed as a patient with eight different specialty teams across the hospital. Martin said, ‘we saw so many different people and travelled to so many different parts of the hospital during our time there. Some of them were very clinical areas which is difficult for young children, like Tessa, who don’t understand what’s happening to them.’

‘With the scans and monitoring Tessa requires there is still a lot of waiting around which can be very stressful for everyone,’ said Martin. ‘In addition, Hayley and I often needed a few minutes somewhere quiet to try and process everything that we were being told. A space which encourages play as well as providing quieter areas for younger patients to nap or parents to have a few minutes by themselves to gather their thoughts would make a real difference.’

‘A dedicated children’s hospital will make life easier for the whole family and that can only be a good thing. Being able to receive treatment in an area that is functional and clinical but designed with the needs of both the children and their families in mind is really important.’