Born with Moebius syndrome, three-year old Charlee Baldwin has facial paralysis and weak upper body muscles which limit her movement. Her parents were told she would never move and she needed to be fed through a tube in her tummy. Now, thanks to a real team effort, not only has she learnt how to roll, sit and hold her head up she is also learning to eat puréed food and has started school. 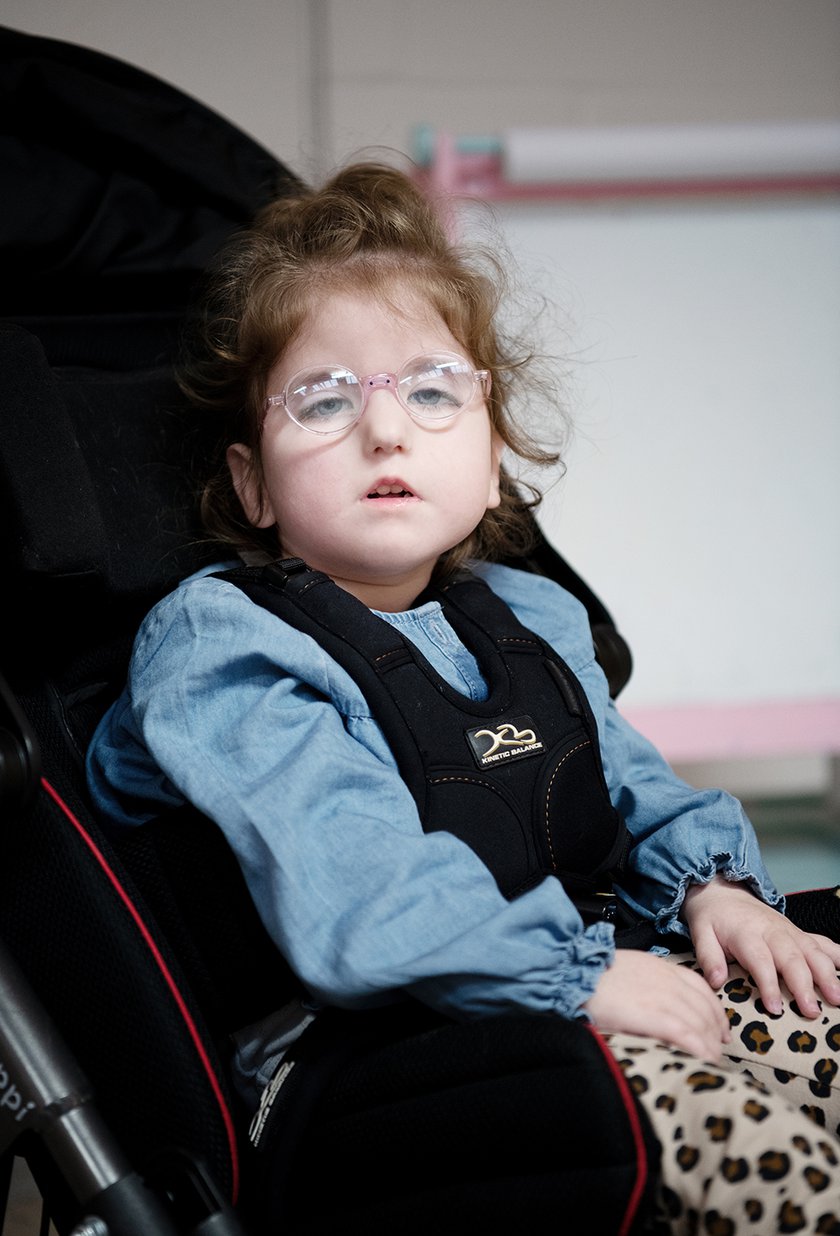 Born at full-term in her local hospital, Charlee’s mum Natalie, quickly noticed that she was floppier than usual and, as well as having a cleft palette, she also had very little movement in her facial muscles.

Natalie, explained: “She really struggled to feed as the lack of movement in her face meant she was unable to make the suckling movement with her mouth. When she did manage to feed she had awful reflux and, as a result, was not growing.

“Charlee was moved to SCBU for the next four or five weeks and following that we had a lot of appointments and referrals to try and determine what was happening but the bottom line was she just could not put on weight. Most parents will be familiar with the ‘red book’ you’re given when you have a baby, to monitor their growth, well Charlee was not even on the chart her growth was so slow to start. In the end we were admitted to our local hospital.”

Charlee was eventually diagnosed with Moebius syndrome, a rare neurological condition mainly affecting the muscles that control facial expression and eye movement. One of the most common features of the condition is weakness or paralysis of the facial muscles, which explained the struggles she was having with feeding. It also meant she had hypotonia, muscle weakness in her upper body, which was resulting in the floppiness.

“For Charlee, it means she can’t move her eyes laterally and she has no movement in her mouth muscles, she can’t smile, purse her lips or give a kiss. The muscles in her upper body are weak and she also has problems with her eyesight and hearing.

“Following the diagnosis, we were transferred to CUH and all our care was managed there. It made things much simpler as by then we were under several departments: cleft, respiratory, gastro and ENT.”

However, Charlee’s ongoing feeding problems and reflux as well as her hypotonia, meant she was continually aspirating into her lungs, causing repeat infections. Following her first birthday she was admitted to Paediatric Intensive Care Unit (PICU) with pneumonia which resulted in a collapsed lung.

“At that point she was so lifeless we were just worried that she wasn’t going to survive. But after a week on PICU she had recovered enough to be admitted back onto the general children’s ward.”

To help with the feeding Charlee’s gastro team recommended fitting a Jej (jejunostomy tube) – a soft, plastic feeding tube which is placed through the abdomen into the small intestine. The Jej then delivers food and medicine straight into the bowel bypassing the stomach altogether.

‘After her tube was fitted we started seeing a difference, Charlee really went from strength to strength. She had her cleft repaired, remained under three month reviews at the hospital for gastro and respiratory checks and we had regular phone calls with her dietitian.”

Because of Charlee’s medical history and her diagnosis with Moebius syndrome, her consultant recommended the family join the Next Generation Children’s project, which provides rapid genome sequencing for young patients and their family.

“Unfortunately in Charlee’s case it really is just one of those things. The testing identified that her Moebius syndrome was not the result of genetics but, in fact, damage caused during the formation of her cranial nerve system during the ninth or tenth week of pregnancy. There are about 20 cranial nerves and apparently its nerves six and seven that are affected.

“However, she is making real progress. Charlee goes to school and we have great community support for her hearing and visual impairment as well as speech language who have worked with us following her cleft repair. We were told because of the hypotonia in her upper body that Charlee would not move but she is very strong willed and through regular occupational therapy she has learned how to roll over, sit up and hold her head up for short sessions with the help of supports for her upper body.”

The family have also fundraised for two trips to America to spend some time at a specialist clinic where they worked with Charlee to encourage her to use her tongue and begin to take some puree and reduce the need for feeding through the Jej.

“Because of the complicated nature of Charlee’s condition it means that many different teams are providing her care, but the important bit has been how they work together. I would hope that a new children’s hospital will make this even more achievable for children with complex needs.

“If we think Charlee is developing a tummy bug or chest infections, we just pick up the phone and call one of her specialist teams. It’s so much easier to ring the team and ask for advice as they know her, and if it saves us taking a trip to A&E then even better as that’s not an easy process if your child has complex needs. It’s little things like this that make a real difference for Charlee, and us.”