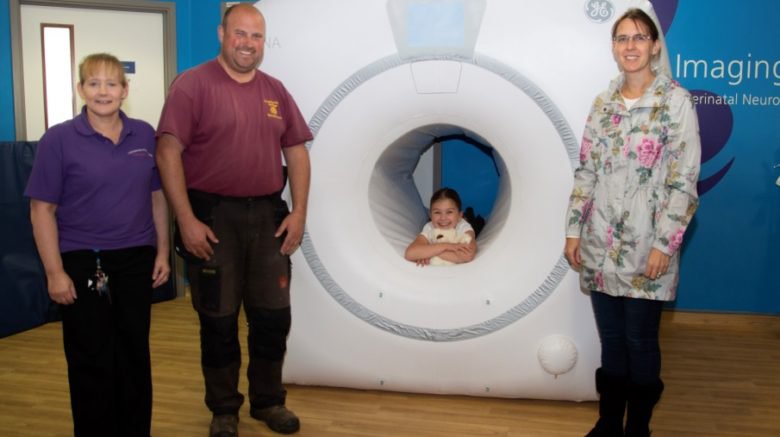 For any child having an MRI scan to check for illnesses or injuries can be a daunting and scary experience.

Magnetic resonance imaging (MRI) is a type of scan that uses strong magnetic fields to produce detailed images of inside the body. Children have to lie still for up to an hour inside a large tube which makes loud banging, clanging and beeping noises while it performs the scan.

In many instances, children who may already be very sick can get scared or frightened by the scan itself. In some cases it may be necessary to anesthetise a child, which has its own risks, just to get them through the experience.

Now, thanks to a £2,000 donation from Addenbrooke’s Charitable Trust (ACT) – a new inflatable version of the scanner is available to help the 1,000 children who have an MRI scan at Addenbrooke’s each year prepare for  the real thing.

Rosemary Hargrave, Health Play Specialist based in the MRI unit, said: “It is brilliant. We can help prepare the children in advance by getting them to lie inside the inflatable scanner to see what it feels like. They can also take a favourite toy or teddy with them if that helps and we can play some of the noises they can expect to hear.

“We are already seeing the benefits, especially among five to eight-year-olds, many of whom would have previously needed a general anaesthetic.”

Having the inflatable MRI available also means the hospital does not have to use the real scanner to help prepare children, freeing up the amount of time it can be used each day.

The inflatable MRI has proved invaluable for 9 year old Chloe Nightingale from Soham, who was facing her first scan to help doctors decipher why she keeps being sick.

Rosemary added: “When Chloe was told she first needed the scan she was very anxious and worried about it, and we thought she may need to be anesthetised. But she has come here today, watched me set up the inflatable and then spent some time laying in it with her teddy while we played her some of the noises the real machine makes.”

It meant that when Chloe and her teddy had her real scan – while listening to the Greatest Showman on her headphones – she was really calm and relaxed and came out with a huge smile on her face.

When asked about the experience Chloe said: “It was good fun. I was a bit scared before but it was good and I liked listening to the music.”

Her dad, Rhys, added: “I think being able to practice with the inflatable MRI in advance was really good and helped calm Chloe down a lot – simply because, thanks to Rosemary, she knew exactly what to expect.”