Children attending Addenbrooke’s Hospital will now have a better idea of what to expect when they visit – thanks to a new leaflet that has been co-designed by young patients and volunteers. 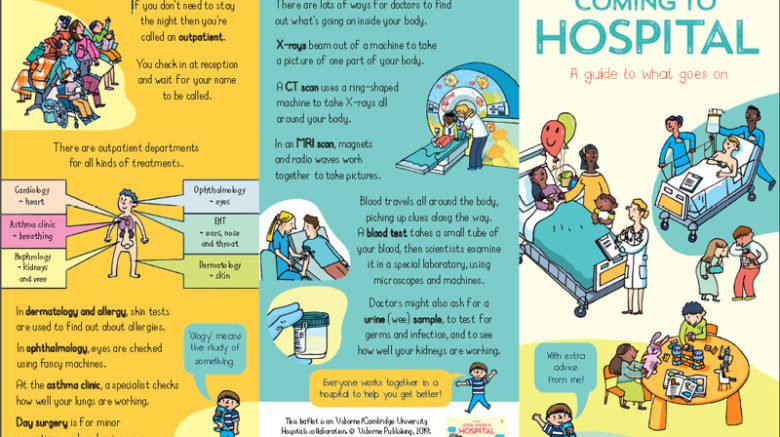 The fold-out leaflet aims to demystify the hospital through kid-friendly illustrations and explanations.

It addresses commonly asked questions, such as ‘Will I be separated from my family?’ ‘Can I wear my own clothes?’ and ‘Will it hurt getting a needle?’

The leaflet features sections on outpatient care, scans, tests, and operations. There is even a part about needles and cannulas which explains to kids that a special cream will numb their hand before the needle goes in.

The leaflet is an extension to the award winning book – Look inside a hospital – which was the brainchild of Dr Zoë Fritz, a consultant physician at Cambridge University Hospitals and Wellcome fellow based at THIS Institute.

Zoë noticed a gap in children’s literature when it came to hospitals and set about putting it right with a lift-the-flap book she compiled with writer and editor Katie Daynes. The book was published by Usborne last year and received an award for best designed/illustrated book from Junior Magazine.

Zoë explained: “Most children will have exposure to a hospital at some point. It’s quite a scary place if you’ve never been there before. The aim of the book is to help children understand what is likely to happen and make them feel better.”

The book proved so valuable that one of Zoë’s colleagues – paediatric surgeon Dr Stephen Farrell – suggested making it more easily available for children coming to hospitals.

Usborne agreed, so the authors worked with medical students, Elisha Clarke and Sanjana Sanghavi to create the new leaflet.

Elisha and Sanjana researched existing information leaflets for paediatric patients, then developed the leaflet with input from young people who volunteer for the hospital’s ACTIVE paediatric patient and public involvement group.

Since September a draft leaflet has been given to children in some of the hospital’s paediatric units. To evaluate its success children and families were asked to report on their experience of the leaflet through a questionnaire.

Early results were positive. Children said the leaflets “made them more calm” and “made them realise there is nothing to worry about”. Some small changes were also suggested, which will be incorporated in the next version, which Usborne has agreed to work on and make available more widely.

Given these results, Zoë hopes that other hospitals will take the leaflets on, so that they can help kids across the UK feel more comfortable coming to hospital.

Want to make a difference for kids at Addenbrooke’s? Got any bright ideas? Aged 8-18 years? Why not join ACTIVE?